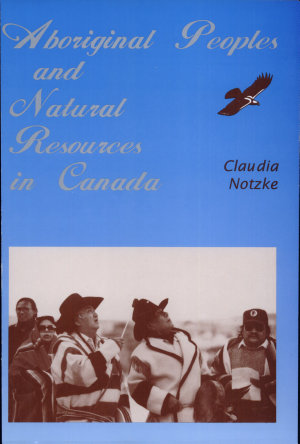 
From the contemporary research of the author, the reader is informed of the most current developments and provided with a well-reasoned outlook for the future. 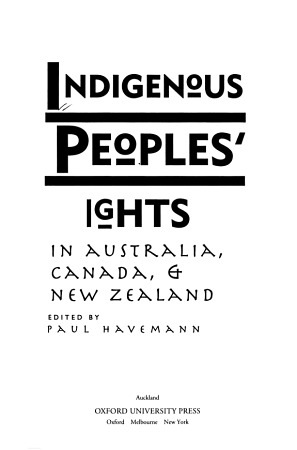 
Provides a contemporary contextual survey and analysis of the legal and political interaction between the British 'settler' states of Australia, Canada, and New Zealand, and the indigenous peoples whom they dispossessed. 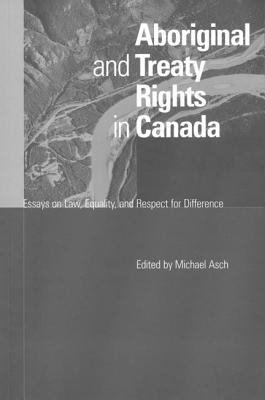 
In the last two decades there has been positive change in how the Canadian legal system defines Aboriginal and treaty rights. Yet even after the recognition of those rights in the Constitution Act of 1982, the legacy of British values and institutions as well as colonial doctrine still shape how the legal system identifies and interprets Aboriginal and treaty rights. The eight essays in Aboriginal and Treaty Rights in Canada focus on redressing this bias. All of them apply contemporary knowledge of historical events as well as current legal and cultural theory in an attempt to level the playing field. The book highlights rich historical information that previous scholars may have overlooked. Of particular note are data relevant to better understanding the political and legal relations established by treaty and the Royal Proclamation of 1763. Other essays include discussion of such legal matters as the definition of Aboriginal rights and the privileging of written over oral testimony in litigation. 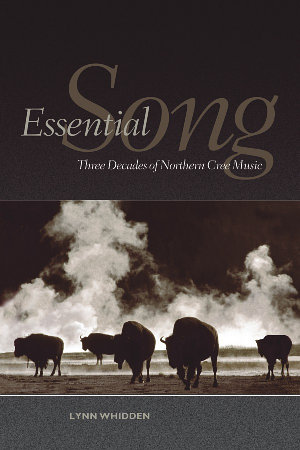 
Audio Files located on Soundcloud Essential Song: Three Decades of Northern Cree Music, a study of subarctic Cree hunting songs, is the first detailed ethnomusicology of the northern Cree of Quebec and Manitoba. The result of more than two decades spent in the North learning from the Cree, Lynn Whidden’s account discusses the tradition of the hunting songs, their meanings and origins, and their importance to the hunt. She also examines women’s songs, and traces the impact of social change—including the introduction of hymns, Gospel tunes, and country music—on the song traditions of these communities. The book also explores the introduction of powwow song into the subarctic and the Crees struggle to maintain their Aboriginal heritage—to find a kind of song that, like the hunting songs, can serve as a spiritual guide and force. Including profiles of the hunters and their songs and accompanied (online) by original audio tracks of more than fifty Cree hunting songs, Essential Song makes an important contribution to ethnomusicology, social history, and Aboriginal studies. 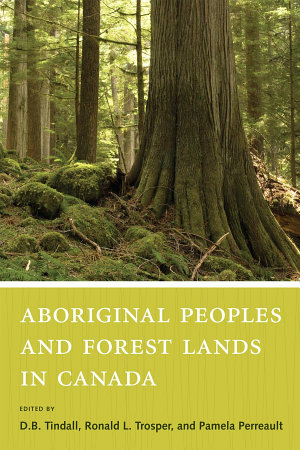 
Aboriginal people in Canada have long struggled to regain control over their traditional forest lands. Aboriginal Peoples and Forest Lands in Canada brings together the diverse perspectives of Aboriginals and non-Aboriginals to address the political, cultural, environmental, and economic implications of forest use. This book discusses the need for professionals working in forestry and conservation to understand the context of Aboriginal participation in resource management. It also addresses the importance of researching traditional knowledge and traditional land use and examines the development of co-management initiatives and joint ventures between government, forestry companies, and Aboriginal communities. 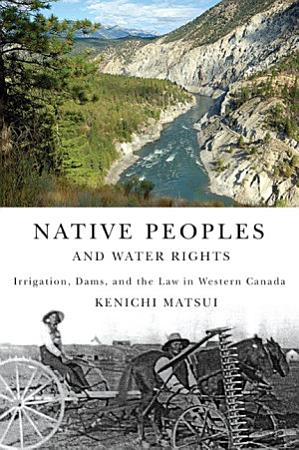 
Economic developments in irrigation, agriculture, and hydroelectric power generation in western Canada at the turn of the last century challenged the way Native peoples had traditionally managed the watershed environment. Facing rapidly expanding provincial and federal power as well as private industries, Native peoples saw opportunities to protect their self-governing rights and explore reserve-based economy. Through a combination of field work and archival research, Kenichi Matsui offers an original and pioneering overview of the evolution of water law and agricultural policies in the Canadian west. By incorporating the history of water law philosophies, water development technologies, agricultural policies, and cross-cultural theories, Matsui constructs an interdisciplinary analysis of how both Native peoples and non-native stakeholders struggled for better rights and livelihood through litigation, political campaigns, and direct actions. The dramatic stories of early cultural, legal, and political conflict in interior British Columbia and Alberta featured in Native Peoples and Water Rights enrich our understanding of current Native rights disputes throughout North America. 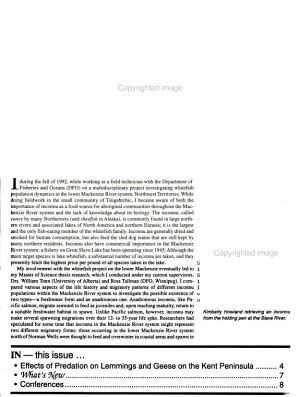 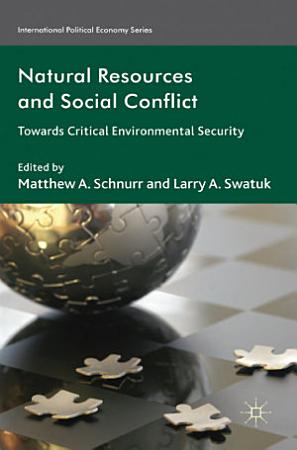 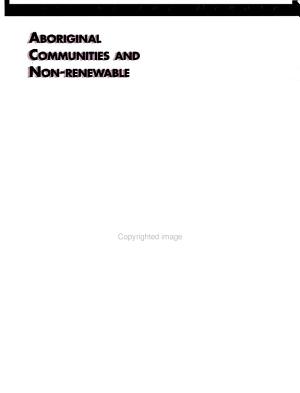 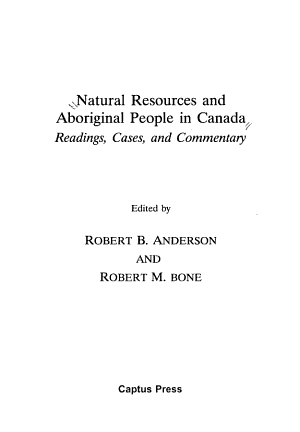 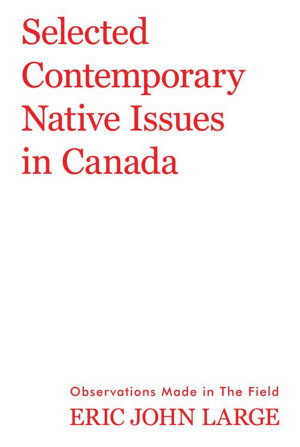 
D escendancy: Great grandfather is Northern Plains Cree, Misih John Large who, according to my father Joseph Louis Large, was a cousin (either biological or adoptive) of Oneetahminahos (Chief Little Hunter) who signed Treaty No. 6 in 1876 at Fort Pitt, North West Territories. Maternal great, great grand father is Wood Cree, Tustukswes who signed Treaty No. 6 in 1876 at Fort Pitt. Past volunteering: St. Paul Junior Chamber of Commerce; Boy Scouts of Canada, Mannawanis Native Friendship Centre; Saddle Lake Red Wings Junior Hockey Club; Saddle Lake Rodeo Club; Custody and processing of wills and estates for Saddle Lake Cree Nation members; Confederacy of Treaty Six Skills Development Sub-Committee; McIvor vs. The Registrar, Indian and Northern Affairs Canada Treaty Six West Technical Committee; Senior Licence Holder 3 Registered Fur Management Areas; political elder for Saddle Lake with Confederacy of Treaty Six First Nations (Alberta); Elder/Advisor with the Health Careers Initiative of the Confederacy of Treaty Six First Nations; Commissioner for Oaths; judge at Saddle Lake Cree Nation Pow-wow; preparing and delivering of Christmas food hampers in Saddle Lake. I am interested in serving people where my experience in Native politics, engaged in responding to federal and provincial policies, federal legislation, and helping to provide a range of public services (education, social services, child welfare, policing, public works, health services, housing, employment procurement, and tribal enterprises) can be useful. I am specifically interested in the health and well-being of people. I am interested in advances made by medicine, social science, mental health, and writing. My values are: do no harm; respect all people regardless of their origin, heritage, and belief; I value history, tradition, and culture but also in the future and in the possibility of engaging confirmed knowledge with new findings that can be explored, defined, processed, and validated for the benefit of people. I am especially interested in voicing health careers for Native people, in particular the youth. I would like to be associated with processes and persons, who operate with a minimum of specific governmental direction, are independent, forwarding looking, ethical, and responsible to society.